My daughter is a junior this year at Grantsburg High School, and she is in Biology 2. This class is always held in the second half of the school year so the students are able to identify birds in breeding plumage as part of their coursework. I have been a birder since I was in Middle School myself, so naturally I was excited to be the one to help my daughter with this project. The students need to ID at least 100 birds.

Here in Burnett County identifying 100 species of birds is a very achievable goal and could potentially be done in one day at the right time (May).  We have several wildlife areas, farmland, lakes and rivers that encompass many diverse habitats and attract nearly 300 species throughout the year, most of which are present in the spring.

Our birding in Burnett County began in late March when waterfowl started coming through the area on their annual migration north. This year was a great year for ducks, geese and swans, with thousands of individuals using Grettum Flowage in Fish Lake Wildlife Area in the southwest corner of the county. Nearly every possible species was sighted, including hundreds of Tundra Swans early on, then Green-winged Teal, Northern Shovelers, American Widgeons and Gadwalls making extended appearances well into April. What we didn’t find on Grettum we found on Phantom Lake in Crex Meadows Wildlife Area and a couple other local lakes.

Most of the waterfowl that are sighted during migration move further north, but several species will stay and nest here in the county, including Wood Ducks and Mallards, Gadwall, Green and Blue-winged teal, Hooded Mergansers, Pied-billed Grebes, Ring-necked Duck, Canada Goose and Trumpeter Swan. A special species, the Red-necked Grebe always returns to nest on Phantom Lake and showed up last week as predicted. 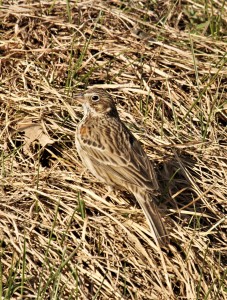 After the ducks come the sparrows and thrushes. Some early sparrows include Juncos and Tree Sparrows, which are often around in mild winters, then Song Sparrow and Fox Sparrow arrive by early April, as well as Hermit Thrush. We are still waiting for the rest of the sparrows, which should arrive any day. I am waiting for my favorite spring sparrow, the White-throated Sparrow, to arrive and begin poking around in my back garden and wake me each morning with it’s distinguishable song. Soon!

Bald Eagles return early and begin nesting by mid-March, and other raptors such as Broad-winged Hawk and Osprey come back in April. Turkey vultures have been winging their way north along the St. Croix River Valley for a couple weeks now. They are easily identified by the deep V shape of their wings in flight and their seemingly clumsy and unsteady way of soaring. 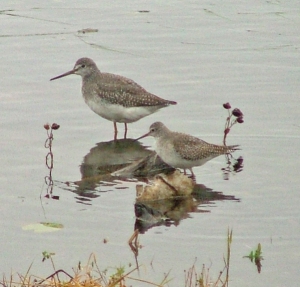 Wood warblers and shorebirds are the last to arrive on their spring migration north. A couple of early arrivals, Greater and Lesser Yellowlegs and Yellow-rumped Warbler show up early, by mid-April, but the rest wait for warmer weather. May is the time of warblers flitting in the tree tops as the trees leaf out. By late May, most have arrived and some have moved on. Several species nest in the county, but even more species move further north to nest in the boreal forests of northern Wisconsin, Minnesota and Canada.

Lake Wildlife Area in Scott Township.  There are many county parks throughout the county. The Governor Knowles State Forest runs along the St Croix River from the southwest corner of the county to Danbury and has many miles of hiking trails and several landings that are wonderful places to look for birds. And of course our own backyards can be excellent places to find many species.

Many online tools are available that can help with bird ID, including apps like Merlin, websites like Cornell University’s All About Birds (www.allaboutbirds.com) and ebird. Ebird is a site that people report their bird sightings, and you can search the county to see what has been seen recently.

I encourage you to go out and start identifying the birds that you see, if only to know their names. It is a great way to spend a morning or an afternoon, and if you have kids its a great way to get them interested in nature.